Two years ago I did a post that offered a look at the royalties I earned and the number of units people were downloading. I want to do the same thing again. I intended to do this every year, but I didn’t get around to it for a number of reasons. But now I have all my data in a nice new MySQL server database and it’s looking spiffy. I have always admired writers who are straightforward about the numbers, so that’s why I’m doing this. I always wonder what other writers are making and what sort of numbers they’re realizing and I imagine plenty of others do, too.

Well, this the real data.

Here are my royalties by year, broken out by distributor.

I started at Amazon in July of 2011. I folded in Smashwords soon after. I use Smashwords to distribute to B&N, Apple and a few others. Last year I started distributing with Selena at eXcessica. It’s been a great partnership for me. I started with one book and this year I gave Selena access to my entire backlog. She has her store (eXcessica) and a few others she distributes too. This data set goes to July 2015, but the royalty numbers for 2015 are skewed low, because it takes two full quarters to get all the stores to report. 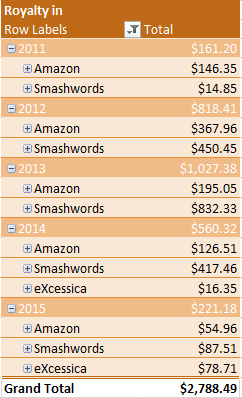 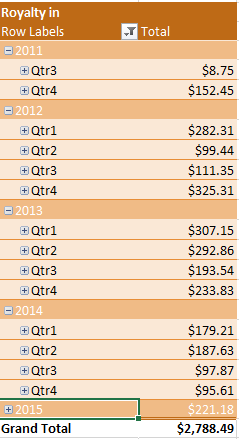 So that was royalties by year.

These are all units downloaded, including free sales. The actual numbers are higher because not all bookstores give you numbers for free sales. Amazon does. Apple and Barnes and Noble do. Smashwords does not.

Here are units out by year, by distributor: 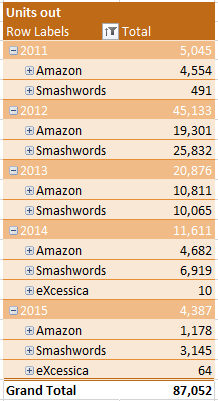 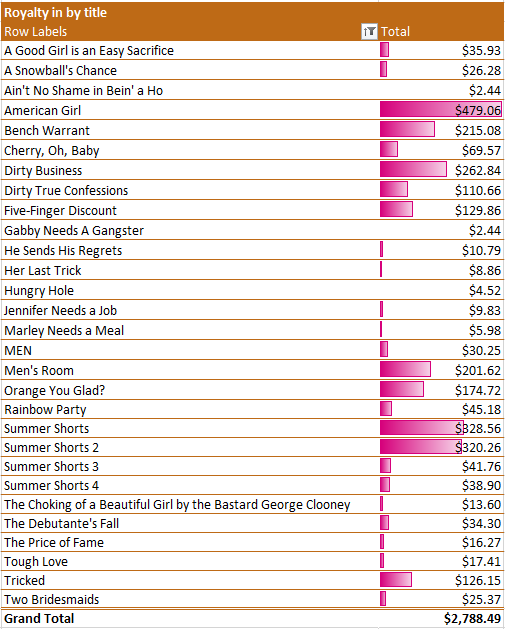 Now here are the units out numbers by title:

It’s no surprise that the titles that have been around the longest have sold the best. They’ve had longer time on the shelf. It’s also no surprise that I made the most money in the same year that I published the most new titles (2013).

Here is my release chart:

These are the dates these titles made their first sale.

Some titles seem to do good year after year. Here are some of my big sellers by year.

Notice how Dirty Business hasn’t had all that many units out? It’s one of my first titles to sell for 2.99 price point. It’s been at 2.99 almost all the way. Most of the others started at .99 cents. Now most of my books are at 2.99. I could go on and on about prices, but I’ll do that in another post. Erotica is a type of specialty books that can sustain a 2.99 price point, even for a short story. (Edit – Yes, I got this little gem about erotica and specialty books from Selena, lest you think I came up with it on my own. I am not that clever!) I like to have a few different price points, so I keep some titles at 99 cents and others free. 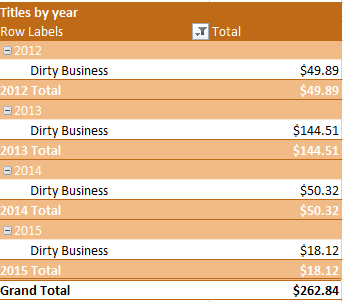 And here is Summer Shorts.

I hope you find this useful. It’s been a lot of fun wearing my publishing hat. As you can see, the numbers are falling off. I attribute this partly to a fall off in sales because of greater competition. Everyone is publishing, but that’s okay, because there’s more than enough room for new writers that want to work hard! It’s also because I haven’t been publishing as much. That’s okay too. I need to find a sustainable pace. I’m going to experiment with higher price points and longer books. I’m also investing more in covers this year. I’m working with a guy who is a real pro. I’ll write more about covers in another post. Meanwhile, if you see anything interesting in these numbers, I’d love it if you’d leave me a note and share your insights.

Have fun writing, have fun publishing! We’re all in this together.